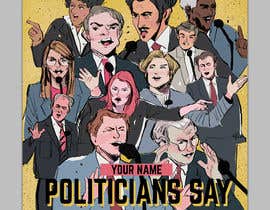 I'm looking for 3000x3000 .jpg file to be used as artwork for a digital release of a single song.

The top of the artwork should have my name at the very top in a medium font (smaller), then title of the song below it in a large font (larger): Politicians Say

The rest of the image below the text should be a bunch of faces of politicians - say between 9 and 15 faces, all separate images within the artwork. They need not be detailed, e.g., pencil drawing is one option. They need not all the be the same size, but they can be. They ALL must be talking (the song is about things that politicians say). Some props like a microphone or podium can be included in some. Some arms or hands making jestures may be included. The politicians should be a mix of demographics: men and women; white, African-American, Hispanic, Asian -- i.e., in proportion to, and representative of, the demographics of the American population. No full body - chest and above. Dressed as politicians dress, i.e., mostly suits and ties; some dress casual. NONE of the faces should resemble any identifiable politicians, i.e., do NOT make any look like Trump, Hillary, Pelosi, etc. They should look like typical politicians, but no one politician in particular. I want the artwork to be in color, which can be the colors used in the drawing, the background, or any combination thereof. Just not black-and-white. A minimal border is an option but NOT required.